Posted At : May 27, 2021 9:48 AM | Written By : Kenneth McLeod, Binghamton University
Related Categories: Workplace 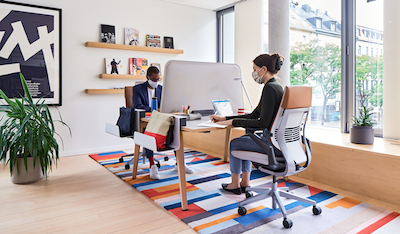 A person’s resting metabolism is very sensitive to temperature, and offices are often too cold for people. Steelcase/Wikimedia Commons, CC BY-SA

With millions of Americans vaccinated against COVID-19, many who have worked from home over the past year will be heading back into the office. Adjusting to new routines is challenging and can affect our health and fitness. We’ve been more sedentary or more active, gained weight or dropped pounds.

As part of my work as a biomedical engineer, I study how physical factors influence human metabolism. This includes height and weight, gravity – and air temperature. My research colleagues and I have found that living or working in a cool environment for extended periods can lower core body temperature. That decreases metabolic rate – how fast we burn calories – and commonly causes weight gain.

Posted At : February 22, 2021 12:56 PM | Written By : used with permission by HP Tech@Work by Linsey Knerl
Related Categories: Workplace, Your Business

Editor's note: It's been a tough year for all of us. For business owners, it's been incredibly challenging. All of our employees have done incredible work staying safe, taking care of their families and doing great work for our companies and organizations.  Here are some ways to recognize them now and always.
Engaged employees are more productive and likely to share good things about your workplace. They are, in a way, the best kind of brand ambassador. But how do you improve employee engagement? One way is to recognize them with employee appreciation awards, though not every idea will work for every employee.
Use our list of best practices as a jumping-off point for your own ideas, and incorporate what makes your workplace special into both the planning and execution stages.

How do you currently show your employees that they matter? You may already do some type of appreciation program. If you haven’t revamped it in years, however, it may be time to take another look. Here are some of the perks other companies are using to show their appreciation for their workers.

OK, managing a remote workforce is a BIG topic.  There are books written about how to do it. Many of us are in the unenviable position of having a hybrid workforce with some employees in-house, others remote and still others doing both. This article from HP Tech@work is a broad overview and since it comes from HP, it's HP centric when they pick certain computer technologies. While we don't do everything it recommends, there are some nuggets that can make your life easier.

Picture it - you’re suddenly tasked with managing remote workers, on the fly. Zoom, lack of oversight, and IT headaches can make it a huge challenge. And without traditional physical views into your employees’ workflows, it’s tempting to micromanage. But pump the brakes.

Research shows it’s better to establish productivity targets and let employees build their own paths to success. Successful remote managers trust their teams for the transition, then coach lagging members as needed to get performance up to snuff. The good news? It’s not hard to step back and encourage success without micromanaging.

Resumes should be concise. The first thing you should do is look carefully at the job posting you are applying for. Look for any specifics that they are looking for in an applicant, and use the same wording they do in your resume, if it is applicable. You do not need to have paragraphs explaining every little detail about previous jobs and duties. Stick to the high-level details that seem important and make sure it is readable. Highlight your main job responsibilities, if you received any recognition, and impressive metrics that you may have achieved.

How to Stop Robocalls

Posted At : November 25, 2020 12:00 AM | Written By : Used with permission from HP
Related Categories: Workplace, Your Business
Robocalls - with all that's been going on in 2020, these are a continued annoyance and possibly worse. And locally, with our large student population from China and Taiwan, Ithaca has its own special kind of madness; robocalls in Chinese! The technology and cost to create and make these kinds of calls is very simple and incredibly cheap - hence all the calls at all hours. Here, Hewlett Packard provides some of the basics in attempting to reduce this annoying part of everyones day.
How often do you find yourself at your desk in the middle of a critical, time-sensitive project only to have your concentration shattered by the ear-piercing ring of your mobile phone?
You look down and see your friend, “Scam Likely,” calling once again. He must be a good friend because you hear from him at work at least twice a day, and he seems relaxed enough to call at the most inopportune times. You want to end your connection with him – given his rude interruptions – but you’re not quite sure how to do it.
The first thing you need to know is that you’re most likely dealing with isn’t a person at all but a robocall. What is that? Well, if you answer your mobile phone and hear what sounds like it might be a previously recorded message, it is most likely a robocall.
And it could very well be an unlawful attempt to reach you.